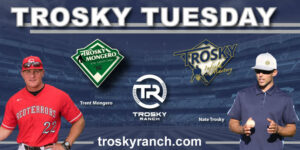 Nate Trosky and Tony Hilde are joined by Nate Fassnacht and Joe Hruska. Nate Fassnacht played at Ephrata High School and was the #5th ranked SS in PA. Nate then went to George Washington University to play from 2017-2019 before being drafted in the 8th round by the Philadelphia Phillies after his junior season. During his junior college season, Fassnacht was ranked as the #1 analytics player in all of NCAA Baseball. He hit .372 with 23 doubles, 4 triples and 11 Homeruns in 59 games while striking out only 23 times in 226 at bats. Nate played his 1st year in the Phillies organization with the Williamsport Crosscutters and was looking to advance before having his second season cut short after 3 days of spring training due to Covid-19.

Joe Hruska played DII baseball at Davis and Elkins College (Elkins, WV). He also played middle infield overseas in Belgium, and the Netherlands. He then returned to Davis and Elkins College where he stayed onto coach after he completed his playing days. Since then, Hruska coached high school baseball for 11 years before taking over the Keystone State Bombers, an elite travel program in PA. The Bombers have had over 130 college commits in the past six years. He has also been an associate scout for the past four years for the Boston Red Sox and currently the Philadelphia Phillies.