To Stream our Show, check out Sports Byline USA

Nate Trosky and Trent Mongero have teamed up to bring to you “CPD,” Complete Player Development, “BTM” Body Tools Makeup; a branch of the Trosky Ranch – 6th Tool Nation! CPD is about information, and transformation. It’s about providing the highest level of insight, to educate parents, coaches, and players in the player development process. CPD is a show dedicated to the aspiring baseball player in pursuit of excellence!

There’s great disparity in what players set out to accomplish, and what they actually accomplish. CPD solves this problem of “Low Ceiling Development!” We believe it’s not a lack of desire, but rather both a lack of education, and a lack of understanding. CPD addresses these underdeveloped topics through the teachings of the “What to Do,” the “How to Do,” and the “Why to Do!” This “Full Circle Approach,” of learning; develops the person, the player, the student, and the athlete. Weekly, Trosky and Mongero and their guests, will uncover the reasons for “Low Ceiling Development,” and provide the answers to “Complete Player Development”.

The weekly show features both players and professional guests to contribute to the topics of “Player Development.”

Nate Trosky is a professional scout, serves and has served as a baseball clinician at various colleges & universities including Stanford, USC, USF, UCSB, Cal Poly, and Santa Clara University. He works with Area Code Baseball and has served as the New Balance Area Code Camp Director and with USA Baseball Break Through Series (BTS) Player Development. He the founder and CEO of Trosky Baseball, one of the top Travel Baseball and College Showcase organizations in the country. Coach Trosky has contributed to over 7,000 players playing college baseball and over 400 in professional baseball, with numerous first round selections, including some of the game’s best players (e.g. Christian Yelich, Nolan Arenado, Joc Pederson, Giancarlo Stanton, Mike Moustakas, Garret Cole, Lucas Gialito, Max Freed, and others). Coach Trosky received All-American and Scholar Athlete awards in college and holds a Masters Degree in Christian Leadership / Youth & Family Development. His baseball endeavors have taken him around the world, coaching in South Africa, Japan, China, Canada, Dominican Republic, Mexico, Hawaii, Germany, Italy, Belgium, Holland, Croatia, and the Czech Republic. Coach Trosky was the head coach of Monterey Peninsula College and coached with the German, Croatian, and South African National teams. He coached professionally in Europe and in three American Minor Leagues. In the German Big Leagues, he won a National Championship as Head Coach of the Cologne Dodgers and was named Germany’s Coach of the Year. Annually, Coach Trosky coaches in the Dominican Republic with top Dominican academies and professional Dominican instructors.

Trent Mongero is a State Champion and 2017 ABCA National High School Coach of the Year. He is the author of Winning Baseball, a nationally acclaimed two-book/digital video instructional series. His high school teams have won over 450 games. He is a national clinician and has presented on the main stage at the American Baseball Coaches Convention as well as seven different state baseball conventions. Mongero is a former Division I Conference Player of the Year and member of the UNCW All-Decade Team. He was an infielder in the Braves organization. He is a current Associate Scout for the Red Sox.

Nate Trosky and Trent Mongero are joined by guest Randy Hood. Randy is the current Hoad Coach at UNC Wilmington! Randy Hood was named head coach on Apr. 29, 2019, becoming just the fourth head coach in the history of the Seahawk Baseball program. While entering this third season as head coach in 2021-22, the…

Nate Trosky and Trent Mongero discuss the 2021 area code games. Show Notes Our camps are not just about infield. It’s about everything all 6th tools. Gold glove membership. Coaching mastery membership. How do the top players respond? Area codes had the most errors. Preparation is king. The mind is the engine. What your mind…

Nate Trosky and Trent Mongero are joined by Dean Schroeder. Dean has been coaching baseball for over 25 years.  He currently works as a high school coach and trainer in Mission Viejo, California.  He has worked with several youth baseball organizations, as well as coaching and mentoring high school and college level players.  He is the founding…

Nate Trosky and Trent Mongero are joined by Cash Ulrich. Cash is the Yakima College Associate Head Coach! Coach Ulrich enters his fourth season with the Yaks as the Associate Head Coach in 2019. Ulrich attended Gonzaga Prep High School in Spokane Washington where he played three years of Varsity Baseball and Hockey for the Spokane…

Nate Trosky and Trent Mongero are joined by Damon Lessler for Part 2! Damon Lessler recently accepted the title of hitting coach at Charleston Southern University in the Big South Conference. Most recently Lessler coached in the Pac-12 conference at the University of California where he served as the Golden Bears’ infield, catching & base…

Nate Trosky and Trent Mongero are joined by Damon Lessler. Damon Lessler recently accepted the title of hitting coach at Charleston Southern University in the Big South Conference. Most recently Lessler coached in the Pac-12 conference at the University of California where he served as the Golden Bears’ infield, catching & base running coach while…

Nate Trosky and Trent Mongero are joined by Andew McKirahan of WIN Reality. https://winreality.com/. Andrew is the Director of Player Development at WIN Reality and former Atlanta Braves Pitcher Win Reality, step into the box against any caliber of pitcher, anytime! Accelerate development at the plate by seeing thousands of extra game pitches from anywhere.…

Nate Trosky and Trent Mongero are joined by Colin Young. Show Notes Jack of all Trades providing policies for many professional athletes Highlight is coaching his boys and teams Was a Junior sign out of Fordham University

Larry Casian is a NorthWest area scout with the SF Giants.  He was a 6th round selection of the Minnesota Twins in 1987 and spent 9 years in the big leagues. Larry offers great insight into what scouts are looking for in players! Former Major League Baseball pitcher Larry Casian was hired as an assistant…

Mark McGwire joins Nate Trosky, Trent Mongero and Tony Hilde. Mark speaks about playing in the back yard and learning how to be a hitter first, with power coming second.  Mark also speaks of his ability to defend and how important that was for staying in the lineup even when things were not going well…

Josh Labanderia is a former Major League infielder and current MLB scout with the Boston Red Sox. He was a 6th round draft choice in the 2001 MLB draft. Josh, Nate and Trent spoke about the maturity of players, what’s important for player development, perspective about the team first philosphy!!! This show was originally produced…

. Dave Coggin committed to Clemson on a Football scholarship in 1995, however he skipped college to go to the Philadelphia Phillies. He was drafted in the first round in 1995. Dave played with the Phillies up until 2006, was in the big leagues from 1999 through 2001. Dave also played with the Rockies, Rays…

. Dave Coggin committed to Clemson on a Football scholarship in 1995, however he skipped college to go to the Philadelphia Phillies. He was drafted in the first round in 1995. Dave played with the Phillies up until 2006, was in the big leagues from 1999 through 2001. Dave also played with the Rockies, Rays…

John Bowker is a former Major Leaguer with the San Francisco. John was a walk on at Long Beach State and his journey to the Big Leagues was far from a straight path. This show was originally produced as an XM Radio show which can be heard here!

Georg Bull was born 1964 in Mannheim, Germany. As a catcher and third baseman, who also played for the German national team, he was one of the best players of his time, winning national titles with the Mannheim Amigos (1983, 1992), Trier Cardinals (1996) and Untouchables Paderborn (2001, 2002). He was the first German player…

Dr. Tom House had a 8.5 Year career and a winning record as a MLB Pitcher. He also spent 12+ years as a MLB Coach. Dr. Tom House is also known as the #1 Pitching Researcher in baseball. In addition Dr. Tom House has become a Quarterback specialist working with the NFL’s best! Check out…

Danielle Martin was married to a Major League baseball player, played softball at UCLA, was a professional surfer and a 2 x World Champion in Jiu Jitsu. This show was originally produced as an XM Radio show which can be heard here! 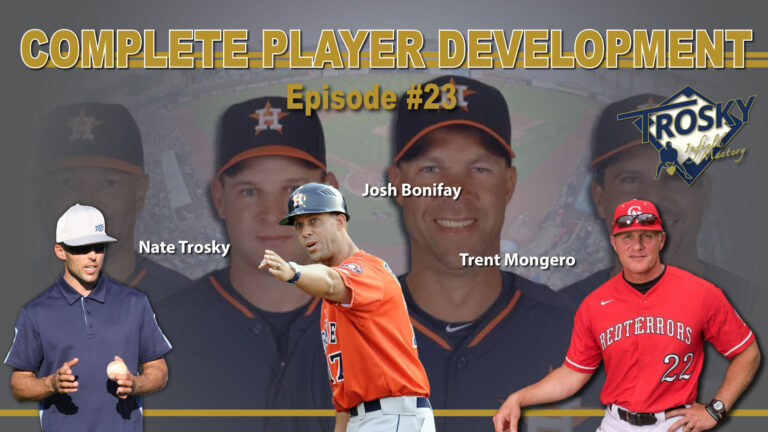 Josh Bonifay is the Director of Player Development for the Philadelphia Phillies. This show was originally produced as an XM Radio show which can be heard here! 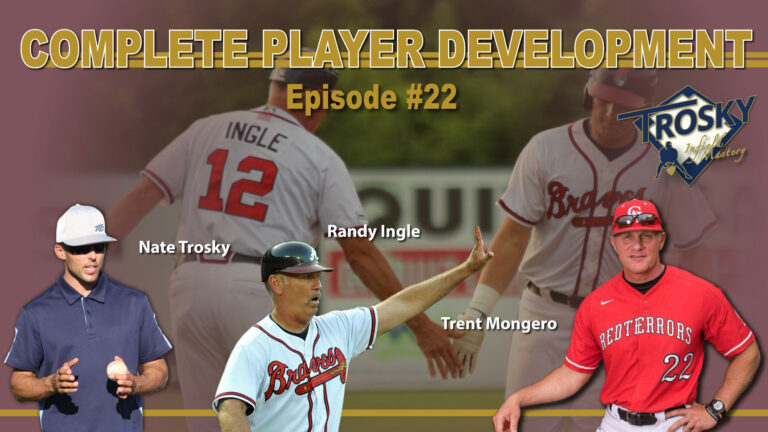 Randy Ingle spent over 42 years as a player, rover and manager with the Braves organization and his final two years in professional baseball with the Colorado Rockies organization. Randy, Trent and Nate spent much of their time discussing the separators of players that have achieved high level success from their time in the minor leagues to… 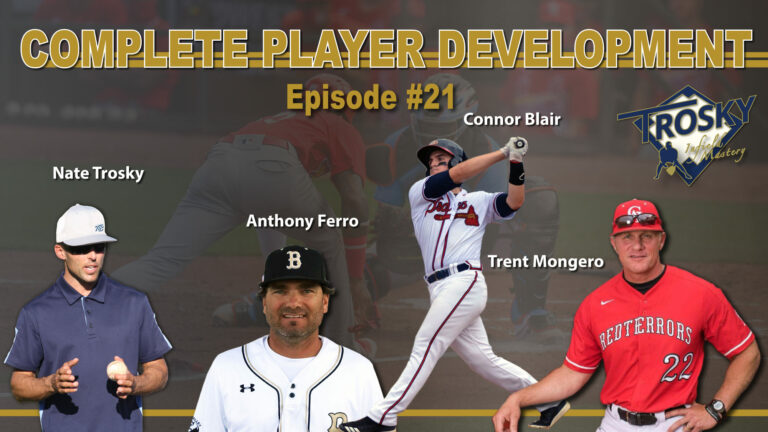 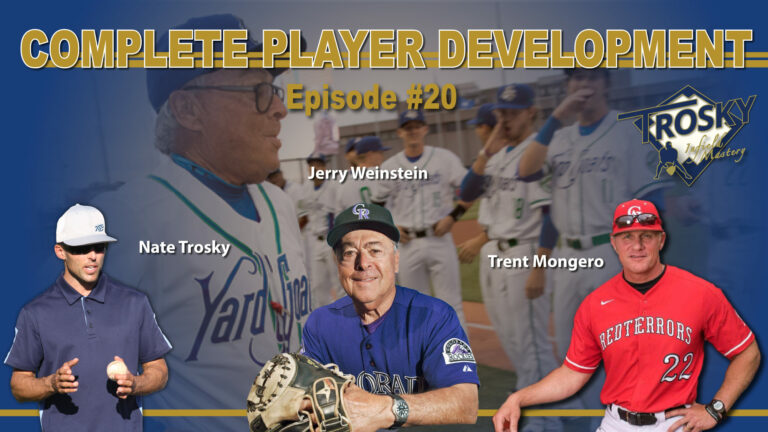 Jerry Weinstein joined Nate and Trent for Complete Player Development. Jerry is regarded as one of the wisest baseball minds in the game. He offers insight on every aspect of the game and is respected by the best in the game. Jerry Weinstein is a special assistant to scouting and player development with the Colorado… 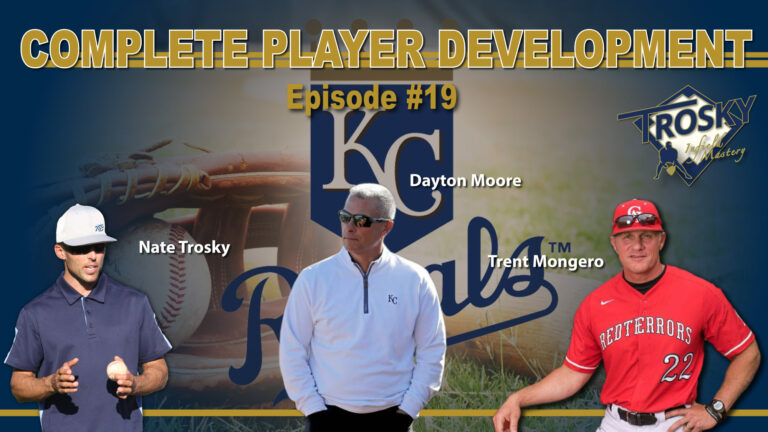 Dayton Moore is in his 14th full season with the Kansas City Royals in 2020 after being named Senior Vice President-Baseball Operations/General Manager on May 30, 2006. He officially assumed his duties, becoming the sixth general manager in franchise history, on June 8, 2006. From day one, the goal Moore set out to accomplish was… 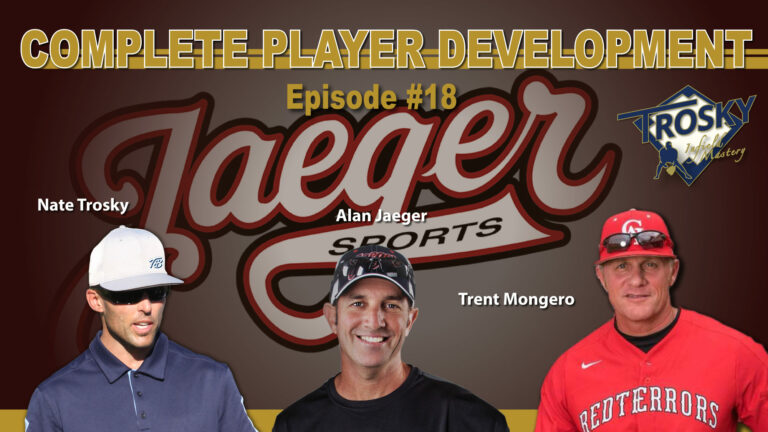 Alan Jaeger founded Jaeger Sports on the principle that athletes need to develop both their physical and mental skills in order to be successful in game situations. As a result of several years of coaching and and personal study was Alan Jaeger’s Mental Training Book, Getting Focused, Staying Focused, and the DVD, Thrive On Throwing, Jaeger Sports’ signature Arm…

Episode 13 features Dr. Barry Davis, Current Head Coach of Rider Baseball Dr. Barry Davis Bio:  Head coach of D1 Rider University Broncs since 2005 May be the only division one college baseball coach with a Doctorate Has 930 wins as a head coach Has coached at the junior college, NAIA and Division I level Member of…

Episode 12 features Steve Springer, Former Major Leaguer and Founder of Quality At-Bats.   Steve Springer Bio:  Steve Springer is the former performance coach & major league scout for the Toronto Blue Jays. After not starting in high-school his SR year, getting cut in college, Springer was drafted by the Mets after a break out sophmore season. After…

Episode 1 featured Coach Jeremy Sheetinger who is the current Head Coach at Georgia Gwinnett College. In his first season the Grizzlies won 22 consecutive games and finished the campaign ranked No. 3 in the NAIA. Ten players received Association of Independent Institutions all-conference recognition. Sheetinger collected his first win at GGC with a road…

Get update emails for when we go live!
(Receive only important updates)

Powered by Convert Plus